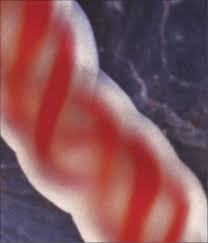 I’m thinking this morning about cord clamping – specifically, when to do it. While a few Western individuals choose lotus birth (the practice of leaving the cord intact and wrapping the placenta up with the baby until it falls off naturally), in my experience most people don’t give much thought to when the cord will be cut. When I’ve mentioned the option of delayed cord clamping to clients, most of them shrug and say that they aren’t concerned about the ‘when’, and some even feel that timing is merely a question of ritual or cultural ceremony.  Usually, here in the west, the partner is given the opportunity to cut the cord and they do so whenever the midwife or doctor tells them to – most often about 30 seconds after birth. While it is true that practices surrounding cord cutting tend to be culturally differentiated, there is also good scientific evidence that supports the delaying of cord clamping until after it has finished pulsating.

First, a little science. As most people are aware, the baby receives oxygen and nutrients from the placenta through the umbilical cord while in utero. In addition, waste products from the baby are filtered back through the umbilical cord from the baby (most umbilical cords have two arteries and one vein). When babies are first born, they actually only have about two thirds of their total blood volume in their bodies. The other third is still within the placenta. You can actually see the cord pulsate as this blood flows from the placenta into the baby (approx. 70% of it in the first two minutes; pulsating usually ceases around 5 minutes, when all or most of the baby’s blood has flowed into his body). Some fluid does flow from the baby back to the placenta as well, but overall the net result it increased blood volume in the baby. This process is not disputed and is understood to be scientific fact.

The dispute emerges when we talk about cord clamping, because there are practitioners out there who believe that it is actually a bad thing for the baby to receive that remaining blood. Their argument is that it can increase the risk of jaundice, because of higher levels of bilirubin in the baby’s blood stream. Extensive new research published in the British Medical Journal, however, has shown that while there is an increase in bilirubins within the blood streams of babies whose cords were allowed to finish pulsating, there was no increase in the incidence of jaundice in those babies. Furthermore, those babies were also found to have 45% more iron in their blood four months after they were born. In the babies whose cords were prematurely clamped (that is, at the usual time) there were significantly higher rates of iron deficiency (i.e. anaemia) at four months. Iron is vitally important for both physical and mental development in babies, and of course plays an important role in carrying oxygen to all parts of the body. You can read more about the study in this NY Times article. (Added: This is the link to the actual study – you may need to create a login to read it).

Humans are the only mammals that hurry to cut the umbilical cord. If, as the most recent and extensive research clearly states, there is no benefit and a significant increase in risk to the baby, why do we do this? This is yet another example of a practice that carries on as the norm in the North American medicalized birth culture, without good evidence to back it up. It is important that women and their partners begin having conversations with their health care practitioners about cord clamping, not only in terms of ‘who’ but also in terms of ‘when’. Everyone deserves evidence-based care from supportive and respectful HCPs. If you think that the issue of when your baby’s cord is clamped matters, your practitioner should too.

For an interesting pictorial that depicts a cord immediately at birth and then in subsequent shots during the fifteen minutes after, go here.

Update (02/15/13): This is an amazing post that is actually about three years old now (I can’t believe I didn’t come across it sooner!). It links to several studies that show the various benefits of delayed cord clamping and calls for a shift in routine obstetrical practice on this front.

P.S. I am always interested in examining how our language reflects cultural norms and expectations – currently the terms in use are “cord clamping” and “delayed cord clamping”, which suggests that the latter is an ‘alternative’, unusual or even abnormal practice. I support those who propose that we begin favouring “premature cord clamping” to refer to clamping that occurs before the cord finishes pulsating and “cord clamping” to refer to clamping that occurs after the baby has received the remaining blood from the placenta. If the options were presented this way, it seems logical that people would be more likely to choose the latter, evidence-supported, option.